Stacking the Shelves is a weekly meme, hosted by Tynga at Tynga’s Reviews, where bloggers can share the books and bookish items that we’ve bought, borrowed, or received each week.

This StS is for the past six weeks.

It has been a while since I did a Stacking the Shelf post, you guys. I meant to do one a couple weeks ago, but things have been crazy in my life right now, so I just didn’t get to it. So this post includes everything I’ve bought or received since my last StS post, which was on December 17, 2016. [Note: Because I received or purchased many of these before the end of 2016, many of them count for the 2017 Mount TBR Reading Challenge I’m participating in. Books denoted with an asterisk (*) were acquired in 2016 and therefore CAN count for the 2017 Mount TBR Reading Challenge. Borrowed books do not count for that challenge. I’m not sure if ARCs received in previous years count for the Mount TBR challenge, but I’m going to count them.] My super awesome OTSP Secret Sister, Heather from The Hermit Librarian, sent me some fabulous packages for December and January. Those packages included:
The Last Olympian by Rick Riordan*
Walk on Earth a Stranger by Rae Carson
And lots of fandom goodies and candy and stuff!
(Thanks so much, Heather! It has been so fantastic having you as a secret sis for these past 6 months!) From the library, I got:
The Absolutely True Diary of a Part-Time Indian by Sherman Alexie (not pictured)
The Perks of Being a Wallflower by Stephen Chbosky
The Face on the Milk Carton by Caroline B. Cooney
The Woman in Cabin 10 by Ruth Ware

From my mom, I borrowed:
The Two Georges by Richard Dreyfuss and Harry Turtledove (pictured in photo below)
(Thanks for letting me borrow this, Mom!) I got a gift card for Christmas from my husband and with it bought:
Into White by Randi Pink*
The Girl from Everywhere by Heidi Heilig*
Unraveled by Gennifer Albin*
Warm Bodies by Isaac Marion*
Monster by Walter Dean Myers*
Patient Zero by Jonathan Maberry*
World War Z by Max Brooks*
(Thanks so much, J!)

Dune by Frank Herbert*
(Thanks, Santa!) I received a fantastic package from Simon Pulse, which included:
At the Edge of the Universe by Shaun David Hutchinson*
Confessions of a High School Disaster: Chloe Snow’s Diary by Emma Chastain*
Alex, Approximately by Jenn Bennett*
and that awesome mug!
(Thanks so much, Simon Pulse!)

What did you guys get this week? Let me know, or leave a link to your StS post (or IMM or any other alternative) in the comments and I’ll try to stop by your blog! 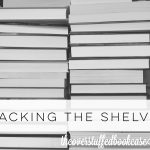