Kiddo’s Corner Reviews is my new feature here at The Overstuffed Bookcase, where my 5-year-old son reviews children’s books! Skippyjon Jones and the Big Bones
Written and illustrated by: Judy Schachner
Published by: Scholastic
Published: 2007
Where we got it: Checked out from the school library

Holy guacamole! Skippyjon Jones is crazy-loco for dinosaurs! The kitty boy enters (via his closet) the land of dinosaurs in search of the fabled Skipposaurus. Instead he runs into his old amigos, the Chimichango gang. When a T-Mex threatens the pack, it’s El Skippito, the great sword fighter, to the rescue. With yips and yowls, he drives the big baddie away, so all the dino-dudes can rattle their bones another day. This fourth entry in a series that Kirkus Reviews called “ay caramba, mucho fun,” will win even more fans for the Siamese cat with oversize ears and an imagination to match. (Cover and synopsis from Goodreads.)

We read the book together.

Kiddo: “When he’s digging for the dinosaur bones.”


[My note: It’s been a while since we’ve read this book, and now that I’m writing this review, I’m thinking to myself, “Does Skippyjon Jones actually dig for bones? I don’t remember that part…”]

Me: “What about your least favorite part?”

Me: “So you like when he digs for the bones, but you don’t like the bones themselves?”

Kiddo: “No, because they look all gross and dirty. That’s why I don’t like them.”


He looks at the artwork a bit more and then continues.


Kiddo: “And he’s so cute in some of the pictures! Oh, I didn’t notice he had a fish. Oh, and puzzles. But he never played with those things, I guess.”

Me: “So what did you think about the book, overall?”


Kiddo: “It’s funny. And it’s also kind of serious. Because his mom says ‘Give those bones back to Darwin before he wakes up.’ That part is serious.”


Me: “So how many stars would you give the book?”


Kiddo: “I like this Infinity-2 stars. That means I love it SO much.”
The Verdict…
Skippyjon Jones and the Big Bones by Judy Schachner is very cute. As a parent, I enjoyed the songs, and loved reading the book with an accent. But one sentence, though, seemed awkward: “Then he popped a pickle in his puss.” It took me a long time to realize that his “puss” is his mouth. It just seemed like a very strange word choice, but of course, my son noticed nothing.


The Kiddo gave it Infinty-2 stars and I quite enjoyed it as well, so I’m going to give it:

4 stars between the two of us. I’m sure we’ll check out some more Skippyjon Jones books from the library in the future!

Find it:  Goodreads │ Amazon │ Scholastic
Disclaimer: We checked this book out from the library. We were not compensated in any way for this review. 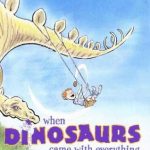