From bloggiesta.com: “In short, Bloggiesta is a blogging marathon revolving around ticking off those items on your to-do list and improving your blog while in the good company of other awesome bloggers doing the same thing.” Bloggiesta is hosted by Suey at It’s All About Books and Danielle from There’s A Book.

I went back and forth about whether I should make a new post for updates and things, or whether I should just wing it.  But I’m such a list-crosser-outer (Whatev. It’s totally a word.) that I just have to have some place to show my progress.  So this is that post, and I’ll also be updating it after the event is over, showing my overall progress and answering any finish line questions there may be.


I’m going to spend the majority of my time getting reviews on Goodreads.  I have a lot already on GR, but I have tons more that aren’t.  But I’m also way behind on responding to comments (surprise, surprise) so I’ll most likely be going back and forth between adding reviews to Goodreads and responding to comments.  I might also attempt a couple of the mini challenges.


Sunday
12:26 AM: I stayed up late so that I could finish getting all my reviews on Goodreads.  I ended up putting at least 35 reviews on GR today, and I’m very happy with that!  Now all of my reviews are on GR (that I know of), and I feel very accomplished!  Now I’m going to go to bed and when I wake up I’ll work on writing a post and responding to comments.
11:48 AM: I’m off to a late start again, today, but that’s okay.  I’ve crossed off one more goal (Write at least one post), and now I’m going to start trying to catch up on responding to comments!
3:35 PM:  I didn’t get as caught up with replying to comments as I wanted to, but I did leave over 20 comments on blogs today, so I feel like I finished that last goal!  I have pool league here in a while, so I won’t be able to do any more bloggiesta stuff tonight. :(  But if there are any kind of wrap-up questions I’ll answer those tomorrow!

Are you participating in this Mini Bloggiesta?  Let me know and I’ll try to stop by your blog! 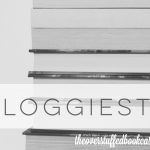