Blind Reads is my brand new feature here at The Overstuffed Bookcase, where I read a book without knowing anything (well hardly anything) about it!

This is my very first Blind Read!  I’m really excited about this feature, and while I’d love to explain all the details about my inspiration and how it works in this post, it’s a bit too long to add here.  Go here to find out more! So, what do you think?  Have I picked a good one for this month?  And remember, if you’ve read this book (or even know anything about it) please NO SPOILERS!  The point of this feature is for me to go into it knowing as little as possible!

Be sure to come back later this month to see what I thought of this book, and if any of my theories were correct! 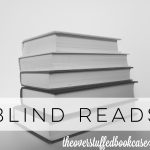